I’m just getting back from tech2D, GIZ’s Sustainable Technology for Development Forum, in Frankfurt. The Forum was full of inspiring talks, demos, performances, meaningful networking and exchanges with other interdisciplinary protagonists involved in making a positive change towards sustainable development worldwide. Congrats GIZ for such a great job on the organization!

Below is the script of my 15-minute lightning talk, Designing Desirable Futures through Human-centered Food Systems.

From the time we were hunters and gatherers to the time when we designed apps to deliver us pizza with just the click of a button, human beings have always been preoccupied about the future of food. And rightly so – we depend on food for our existence.

This fascination is a breeding ground for elaborate visions and fantasies about the meals of tomorrow… or even 100 years from now.

In 1962, a futuristic illustrator named Arthur Radebaugh predicted that Americans would be producing larger-than-life vegetables with gamma-ray sprinklers in a highly industrialised context.

It’s easy to laugh. But the predictions that we make about the future influence the actions that we take towards it. And with this comes responsibility, especially if are trying to move beyond the temptation of the ‘default’ future.

Who thinks the future is grim, sad and bleak? Who thinks it is full of new and exciting opportunities? Well, there is no one predetermined future – there are multiple futures.

If we fast-forward from 1962 to 2017, we find an exercise that was carried out by the World Economic Forum to provoke and question our assumptions about the future of food.

In a glocal world, we have seen that it is possible to be highly connected to both the entire globe and also very specific local contexts. This means very interesting things for our food systems. Just think about how mobile phones have changed the lives of rural farmers in sub-Saharan Africa.

Whether on a local or global level, the misuse of resources has implications on pretty much all aspects of life. In a resource-constrained world, small-scale farmers – who make up the majority of the people growing the world’s food – are often the hardest hit when we use resources inefficiently.

But, I am a stubborn optimist and I believe in desirable, healthy and sustainable food futures. So allow me to share some insight from my experiences. 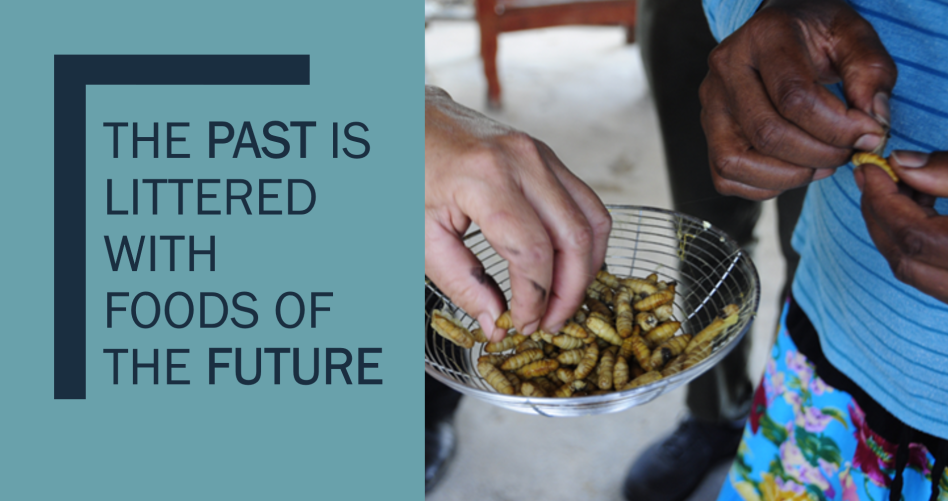 For the last 6 years, I have been looking towards the past in order to better understand the future.

When I was working for the Food and Agriculture Organization in 2012, many people laughed at our work on valorising the consumption of various edible insect species. But yet, traditional food sources like insects are often some of the most sustainable and healthy foods out there.

The modern potential of ‘traditional’, ‘forgotten’, ‘undervalued’ or – my favourite – ‘vintage’ crops and livestock is immense: we can greatly improve the techniques to grow, harvest, process and market these foods and their products now and into the future.

Ten years ago, no one would have ever thought that crickets would be both a popular food in the poorest region of Thailand and a popular snack amongst the urban elite in Bangkok. Forgotten foods are on the comeback.

Yes, we can certainly invest in the development of technologies to produce affordable and delicious cultured meat products. But can’t we also put our efforts into improving the foods and production systems that we already have?

It’s so easy to sit in a boardroom, thousands of kilometers away and imagine what would make this Tanzanian farmer’s life better. But would it really be transformative? Would it be long-term? (or maybe you should stop speculating and speak to her yourself.)

Throughout my research career, I have had the great pleasure to speak to hundreds of farmers. As a part of the GREEiNSECT research project funded by the Danish International Development Agency, my colleagues and I had the aim of investigating the contribution of insects to green economy. This involved the co-development of production techniques together with farmers.

I believe that our research project was successful within a four-year timespan not only because we looked at improving the production technologies (which would benefit the farmers), but we also made a concerted effort to affect policy (which would enable a larger societal impact in the long-run).

At the same time, we helped facilitate the transfer of knowledge about cricket farming from North-Eastern Thailand to Western Kenya, where it was then adapted to the local context. The outcome might have been very different had we transferred the knowledge from Northern Europe to Kenya.

I’ve unfortunately seen the effects that the promotion of inappropriate technology can have on rural communities. It causes fatigue, can make farmers more risk-averse and it is a waste of time, energy and resources not only for the recipient but also for those who are trying to implement the new technology.

Another thing that we need to consider is the entire system. The food system is a complex web of all the processes and infrastructure involved in feeding a population. It is influenced by social, political, economic, cultural and environmental contexts. So, when we make a decision in one part of the system it will have knock-on effects on other parts of the system.

Let’s stop for 5 seconds. I would like you to visualize the context that you are working in and which technologies might be appropriate. While you may not be working directly with food and agriculture, each and every one of us will feel the effects of the decisions that are made about our food.

I am not going to put you on the spot but I am going to tell you what comes to my mind:

I’m thinking about Mama Maria, one of Dar es Salaam’s coolest urban farmers and how her mobile phone has been so essential to creating networks of urban farmers who have advocated for the incorporation of urban agriculture into the city’s Master Plan. Urban farms are providing 60% of the fresh leafy greens consumed by Dar es Salaam residents. Without acknowledging their importance, the city’s food security would be compromised.

I’m thinking of a company that my friend Ydun works for. It’s called Apeel Sciences. These guys developed the technology to create a natural coating that can be put on fruits and vegetables to increase their shelf-life. This technology can help prevent food waste and, in turn, ensure better profits for everyone in the supply chain while at the same time reduce the environmental impacts caused by resource inefficiencies.

I’m thinking about a very cool company in South Africa called AgriProtein. They produce black soldier fly larvae for fish and poultry feed at their factory in Philippi, Cape Town. They have purposefully made the decision not to automize their facilities so that they can employ over a hundred local people from one of Cape Town and South Africa’s poorest and most dangerous neighbourhoods.

These are all examples of how our choices about technology are facilitating improvements across the food system for the benefit of humans and the environment.

Everyone here is representing the needs of different kinds of stakeholders so it would be wrong for me to say that there is one particular way of creating more human-centered food systems.

But what I can tell you is that there is a lot of potential: the food and agriculture sectors have been slow to harness the power of recent disruptive technologies. According to the World Economic Forum, they have attracted significantly lower levels of investment and have inspired fewer technology start-ups than other sectors. But you can change that. 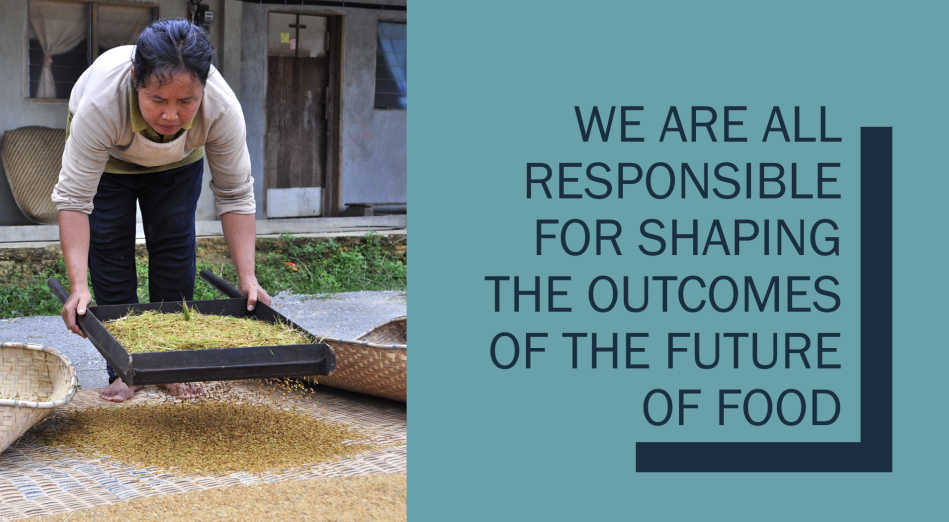 At a recent conference on human-centered tech in Copenhagen (check out the Copenhagen Catalogue and its principles for a human-centered tech future) one of the delegates said that before proceeding with a new technology we should consult a 7-year old and a 70-year old to understand what the impact of our decisions may be. When it comes to food, we also need to look at the systems level and then again at the human level.

Whenever I make a decision that may have a lasting impact on others I always ask myself:

– Who will this technology benefit most?

– What are the trade-offs and unintended consequences?

– Is this what is needed right now or are there other more pressing issues within the supply chain or food system to consider first?

Because in the end, it’s up to us to choose if it is a ‘default’ future that we want or if it is one that is healthy, sustainable and human-centered.’